It has been announced that the CONDEMNATION government are putting many of our forests up for sale.Our forests are priceless and we must protect them from those who wish to capitalise from them
Posted by violet maze at 17:12 No comments:

Labels: save our forests

On Monday February 15th 2010 the property developers with the Land Restoration Trust began work on the Waterfront Park. They are reinstating the Moon wall, pagoda and oriental gardens and restoring the lake. Not sure if this is democracy in action (see previous post) as I think our campaign group should have been able to access cash from the North West Development agency.

I think it's completely wrong that the original terms agreed at the public enquiry have been over ridden in a council meeting with no public there. Typical Liverpool City Council behaviour though!!!!
UPDATE
I have reported Liverpool City Council to the Royal Courts of Justice in London re: amending conditions agreed at public Inquiry.
Posted by violet maze at 11:55 No comments: 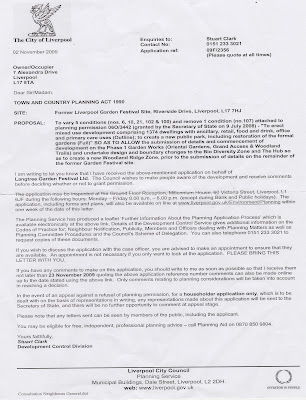 About £3,000,000 pounds of public money has been given to the property developers for the site even though they don't have the £65,000,000 to build the apartments. This is for the park they promised to pay for in order to get full planning permission for the flats.

Liverpool City Council are also sneakily giving away public open green space in Otterspool Park. Previously we were told nobody visits the prom area as it's dangerous. Suddenly, when it suits, it is a popular place in need of recreational facilities for all the visitors. Make your mind up!!!!
Objections to the city council please:
Steve.cook@liverpool.gov.uk
Posted by violet maze at 11:52 No comments:

ANNUAL GENERAL MEETING FOR 'SAVE THE FESTIVAL GARDENS CAMPAIGN'

This will be held at The Old Police Station, Lark Lane, Aigburth, Liverpool 17. From 2-4pm.

We will be discussing our conservation work to save the skylarks on site (see previous entry) and other business.

I wish to raise the idea about asking the property developers if they will allow us to build an Earthship (sustainable environmentally friendly  building) from reclaimed materials and donations for solar panels.

It is unlikely any flats will be built for years due to half of the property developers going into administration. Planning permission also has to be sought again after 3 years if nothing has been built.

It will be of benefit to the environment, property developers and the local community to have people working regularly on the site.

The Earthship could also engage the locals as they could help build it. It would be good to have young people help us build . If the property developers start work we could demolish it.

If anyone has any other suggestions for the AGM please contact the campaign group. The meeting is open to the public.

Hope to see you there for some refreshments and cake.
Posted by violet maze at 16:34 No comments:

Labels: Annual General Meeting for 'Save The Festival Gardens Campaign'

The Southern Grasslands area of the Garden Festival site is being maintained, with permission of the property developers , as a nature reserve for skylarks. These are a protected species that have been nesting in the area for about 50 years. Years ago they were found on the old golf course up the road at Jericho Lane.

Unfortunately they disappeared from the Southern Grasslands a few years back when the trees were felled nearby.

Members of the 'Save The Festival Gardens Campaign'  have been meeting on alternate Sundays for about six months to clear brambles so that predators like crows cannot hide  and then attack the skylarks.

We have almost finished and have been told that some other birds have returned to the area nearby to nest. Fingers crossed that the skylarks are going to come back to the Grasslands any day now to build new nests.
Posted by violet maze at 16:06 No comments: